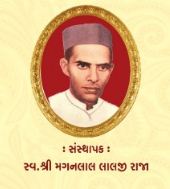 One cultured family was living in Porbandar state (originally Dwarka), Vishawada village. Shree Lalji Bhimjibhai Raja and his wife Amritben were parents of Shree Maganbhai, who was born in 11.12.1915. Although he was not well educated, he had full faith in religion, and due to his religious inclinatoin, in company of saints he developed well. Saint Devidasji Bapa was his Guru. His wife Rambhaben was also very religious and she was always very helpful in all his deeds. Shree Maganbhai with his family came to Mumbai in 1930 and in 1937 settled down in Pune where he developed a good business and with courage faced the ups and downs in business. In Pune, he established a factory called "Raghuvir Dresses" for making ready made garments which gained a good reputation. Pune had many Gujarati societies. Pune Lohana Mahajan, Shree Gujar Kshatriya Samaj, Shree Saurashtra Leo Patel Samaj, Shree Darji Samaj, Shri Lohar Samaj, Shri Suthar Samaj, Shri Vanik Samaj, Shri Kachchi Samaj, and many people from these societies expressed their wish to do Bhajans in Manganbhai's factory. All brothers consented. Every Saturday a bhajan programme was arranged at Raghuvir Dresses. All members of all societies used to sit together and do bhajans regularly. They all came near to one another and as a result the Gujarati Society in Pune became a strong utilitarian society.

Nature's ways are unpredictable one day one devotee of Shree Jalarambapa met Shree Maganbhai and said that in many cities and in many small and large villages, Bapa's birthday is being celebrated. Pune does not have this pleasure. The day came in Vikram Sauvat 2017 Karthik Shukla 7. It was decided to celebrate Bapa's birthday in Pune with full vigour. The group did not have any monetary facility. But only with full faith and will power, it was decided to name the group"SHREE JALARAM SATSANG MANDAL -PUNE". Invitations were sent and with Bapa's big photographs, a procession was taken out. Full rights were performed and at noon, all had group lunch as prasad.About 3000 people participated in the evening. A Bhajan programme was arranged which lasted up to midnight. And on the same day it was decided that Shree Ram Jayanti festival, Shree Tulsikrut Ramayana will be celebrated. This festival is of 10 days, Shree Maganbhai had full faith that all the expenses of this two festivals will be made available by devotees in Pune.

One day on 12 .07.1961 the Panset dam made of mud broke and water flooded Kadakwasla Dam. Pune was totally flooded. Deccan area in Pune had 20 ft. water, Raghuvir Dresses was also flooded all fabric and machinery was destroyed, but due to Gods blessing the two photographs of Jalaram Bapa and Rama's were totally intact. Water and mud had not even touched those photographs. This incidents tremendously increased Shree Maganbhai's faith. He also believed that whatever happens is for good.

On Savant 2017 Asad vad 15 Shree Maganbhai decided to go to Alandi for recreation. He was not keeping well and he wanted to stay at Alandi "Devni"for one or two months. He met one Joshi Maharaj who suggested that Alandi should have Madhukari (provision of foods for the needy). Shree Maganbhai informed the member of Shree Jalaram Satsang Mandal. They all agreed and on Savant 2018, Mahasud 1, Alandi had Gods blessings "Annapurna Kshetra" was started. In Madhukari (Ram Roti - food for poor), rice, dall, roti, sheero, pulses were served. Till today this Madhukari is continued unabated. Shree Joshi Maharaj suggested that if we have a separate plot for a Temple having all present Gods and a residential facility for devotees and for Madhukari, it would be very nice indeed. Inspite of the paucity for funds, Maganbhai conveyed this suggestions to the members, who all agreed purely on the faith of Shree Maganbhai and decided to select a convenient plot at Alandi for this purpose. All these members selected this plot where at present the temple is built. The plot was 198 ft. x 172 ft. = 26136 sq.ft. valued at INR 5500.00 included stamp duty. It was decided to pay INR 1500/- to start with. That much money was paid but there was no provision for the balance. Maganbhai came back to Pune. Every member of the group happily contributed to the fund.

On Savant 2019 Aso sud one Shree Girdharbapa from Virpur came to Alandi with guest and gave INR 1000/- as gift and suggested that the plot selected by the group will not be sufficient and suggested that we should buy the adjacent plot also. The adjacent plot was 24,125.00 sq. ft. valued at INR 3825/-.The plot was purchased at INR 4100/- including stamp duty. At present the total plot is 50,261 sq.ft. On this plot at present the temple, 3 residential buildings, dining hall , medical clinic etc are situated.

To raise the fund , first charity show of Gujarati drama called "Panetar" was arranged. The group collected INR 20,000/- after deducting all costs. In Savant 2020, Ram Jayanti festival was celebrated. Shree Dula Bhagat attended this festival and arranged the programme. He suggested that any devotee can pay INR 1001/- a fixed deposit should be made and the Madhukari(food for needy) costs can be met with the interest from this fixed deposit. Mumbai's Rukshmaniben donated INR 1000/- at that time. From that day onwards a programme of Madhukari was started till today and was named the Rukshmani programme.

On Savant 2020 Asovad 15, with the help of all brothers, the construction was started. To raise the funds, 2 charity shows were arranged in Mumbai and 2 at Pune. INR 20,000/- were raised after deducting all cost. This is how the group progressed slowly but steadily with zest and enthusiasm. Then in Savant 2021 at Alandi a plot of 200,000 sq.ft. was purchased at INR 10,000/- donated by one Radhaben. The Gaushala situated at this plot for rearing cows is thus called "Radhaben's Gaushala". At Alandi and Pune drinking water was being served for all. At Varah Swarup village in Saurashtra in Savant 2021, a feeding center was started, and at Junagadh another feeding center was arranged for 5 days at Mahashivratri. In Savant 2023, Visawada village near Porbandar another feeding center was started.

On 10.01.1969, Friday at 8.05 pm Shree Maganbhai passed away after accomplishing so much work. Next day it was decided that the leadership of the group was to be taken up by Maganbhai's younger brother Shree Liladharbhai Lalji Raja. He started the good work with full enthusiasm to continue the good deed that his elder brother had started. It was decided to mention the name of Shree Maganlal Lalji Raja on every official paper of the group called SHREE JALARAM SATSANG MANDAL. He is always to be remembered as the founder of the group. Shree Liladharbhai vowed to continue this task in aid of the devotees of Shree Jalaram with full enthusiasm during his lifetime.

Today, this group is now registered as a Trust and about 10-11 acre land belongs to this trust in which the guest houses, Gaushala, Safety tanks, farms, dining hall and temple are situated.

Shree Liladharbhai, President of the Trust, passed away on 20.06.1998, after having continued the good deeds as above. Thereafter, the steering of the trust has been successfully taken up by his son Shree Dhirendrabhai Raja. The trust is progressing very well, day by day under his able leadership.